Reapers have identified body snatchers at the Darkness rock concert in the Wasteland. They use a 'Romeo' (or a 'Juliet') to seduce and isolate young victims. And John also learns that his daughter his at that same show (she has a bug on her). Body snatchers have made their move towards Monica (they wanted a non smoker), and a certain John Dillis is their Romeo. While Tom moves out to give Jessica a lift, Monica is abducted (10 pages).

There are six body snatchers in this strip, Sergei Zlotan, Terri Reilly (previously Eve Molitorni), John Dillis, and three other men not named.
This strip is preceded by two ads from the Bureau for the Prevention of Identity Theft. 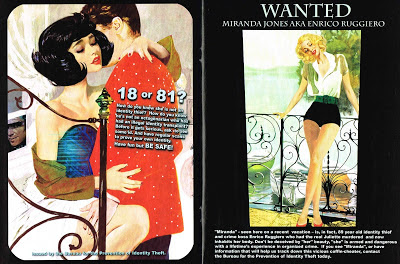