American Reaper II: Reapers are watching the hackers location from a distance, but it's a crowed place, and there are too many people to check. Professor Taggen grows tired of John constant opposition so he let Chief Wyatt ousted him. (10 pages).
Reaper Files: this is a flashback story where an ex nineties movie star Tawny D'Abo is executed by reapers after she had stolen the body of a young mom (2 pages).

This issue inaugurate a two page Spin-off entirely drawn by Fay Dalton, "Reaper Files". I don't know if it was planed from the start or if Clint Langley was way behind schedule that month (only 10 pages of American Reaper instead of the usual 16). John blond's partner on the cover is not identified in the story. 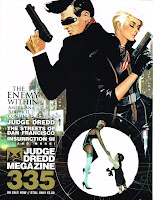