American Reaper II: while John pursues the sniper, Jessica is being kidnapped for the profit of Katherine Taggens who intends to use Jessica's body as a host (12 pages).
Reaper Files: in this story we meet Blue Eyes, the crazy Reaper who judges youngsters without scanners. John thinks the whole deal with psycho Blue Eyes is a false flag built in order to discredit the reapers (6 pages).

This issue displays again a 6 pages Spin-off entirely drawn by Fay Dalton. The four young bloke in the subway are watching the movie "Tipping Point" with Tawny d'Abo, which was the body snatchers of the first "Reaper Files". Indeed, on the back cover of the megazine we find this poster ad: 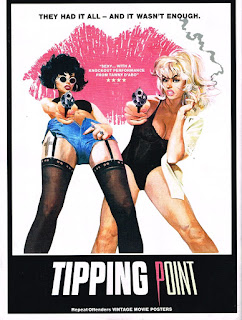 
This preview has been displayed on the CBR website: