Hammerstein cannot stands the sight of Ro-Jaws being dismantled by Mek-Quake, thus he fights back and nearly destroys Mek Quake. They are observed by Quartz and Sir James Grey, commissioner of the robot investigation police or  RIP, who reveals that he believes Hammerstein is the war robot responsible for the assassination of the president. Sir James also thinks that the leader of Apex Nameless has been planting a defiance code in Ro-Jaws. Instead of sending Punishment and Discipline Troopers, Sir James suggests to keep the two robots under surveillance in case they could lead them to Apex (7 pages).

Sir James Grey theory about robots defiance is that they have to be terrorized into obedience, like black slaves were treated. Real world allusions are always frontal in Pat Mills work, and this is kind of healthy. In the opening page, Ro-Jaws monologue is a reference to the climax of Blade Runner (Ridley Scott, 1982), thanks to Alan Hollowayto for that out in 2000 AD #1968 letters col. 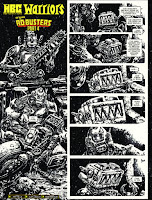 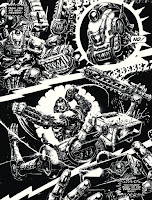