New York City, 2062. Fifty years in the future, identity theft has taken a new and deadly twist - victims have their minds and personalities erased and their bodies stolen by the elderly rich seeking another chance of youth, or by criminals and terrorists with even more sinister motives. A team of special agents, known as Reapers, has been formed to hunt down those that have illegally transplanted their identities into others and terminate them with extreme prejudice. In order to do their job, they have undergone a cybernetic procedure to dispose of a permanent identity theft scanner activated by a button on their temple. Soon, I.D. transplants will be legalized and prison inmates seems to be highly potential body donors. In this first part we are following the main characters, John, who led the Reapers section, as he investigates a case of transferred identity after the death of a Mr Santore, an old trained assassin. While the word is out that the first legal identity transplant will be an award to distinguish an high profile personality, our hero remembers how three years earlier he had to kill his own son Paul, whose body just have been stolen, before the eyes of his sister Jessica (32 pages).

Back cover art for this megazine is an advert issued by the Bureau for the Prevention of Identity Theft. Illustration by Fey Dalton. 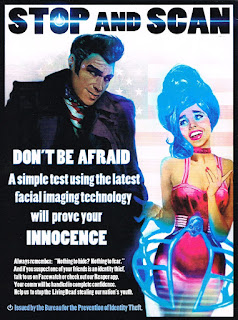