At the Sing Sing maximum security correctional facility, the identity transfer is being performed between Elmore Taggen and a serial killer "donor". At the press conference following the successful operation, John can't help expressing his negative feeling regarding that technology, and explains again why he has successfully lobbied for prohibiting transfers for the partners. At the bureau for the prevention of identity theft, John and Scalia (who has lost a sister to the "coffin-cheaters") are testing new scanner security settings, waiting for them to be intercepted and send out to hosts' implant. But the hacker transmit the new settings to thousand of destinations, flooding the reapers. Still, they manage to locate the hacker's location, and John reaches him and terminates him. But he is targeted by a smart bullet, homing on his GPS location (16 pages).

We finally discover the hero's name, Matherson. There is a two pages movie review following the end of the strip, and this time directly integrated in the story (the review is written on a panel behind the sniper that has shot towards John). 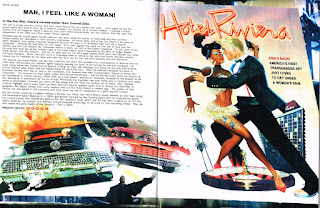