At the identity transfer awards, the identity of the men who will benefit of an identity transplant are announced: Haley Dunbar director of the weather control program, Chuck Webb inventor of the solar nano-cell and Professor Elmore Taggen, pioneer of the identity transfers technology. Katherine Elmore is there as well as her niece, Jessica, John's daughter. Meanwhile and before attending to the ceremony, John is questioning the head of Cornell youthful offender correction facility, suspected to take part in a running body theft operation using young inmates. The late Salvatore Bobone was a prisoner here and has complained about this operation. We then discover the Center for Medical Excellence where the spirit of old Alice is being transplant in Monica's body (16 pages).

This megazine is misdated as of 19 February 2013 on the cover. The flexi that John shows to Elmore Taggen uses an advertising illustration published in Meg #321.
This strip is preceded by a two page flexi from the illegal Center for Medical Excellence, advertising that their transplant beat reapers' scanners. 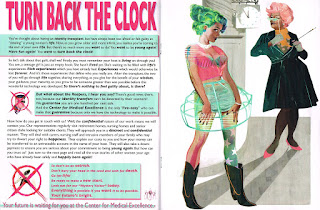