McGurk is learning that the secret Corporate CEO's meeting is scheduled for the 28th. He is in the process of bringing his Alamosaurs herd to Texas and stumbles across pastor Sunday who displays human fingers scratch marks on his chest. McGurk suspect that these scars are something to do with the recent disappearance of Jessamine Johnson, so he relieves Sunday of his duties (McGurk is willing to order a full investigation as soon as they get to Seabed City). He will be replaced by Earl Reagan and Claw Carver surprisingly back from the triassic (6 pages).

McGurks keeps on him a vial of time pills in case he had to hunt Gorehead through times. The Alamosaur herd has the same "gaz" problem as our cattle, only much more enhanced! 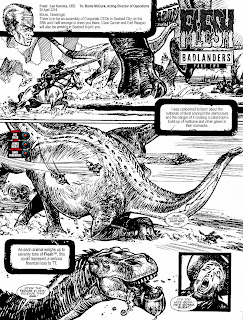 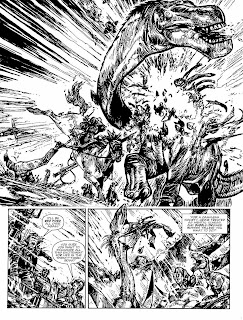