Centuries have passed after Harry Shrapnel's death, and he is bringing back to life again thanks to Medusa, Mars sentient incarnation. But humans are also brought back to life and an army of living dead is called in order to stop human terraforming Mars. Among these zombies are the Jung Cannibals that have taken over the Road-kill Kafe where now human flesh originating from provoked road kill is served. Their leader Road Rage is in the process of preparing a young hippy tourists couple to be eaten when Harry enters the Kafe (5 pages).

Some B&W inks are used again here by Clint Langley as the story ties in with events told in prog 2000 (December 1999) also in B&W. The story 'Roadkill' drawn by Kev Walker introduced Road Rage and his cannibal zombies's crew after the events depicted in this present issue. Biol, Mars human based synthi food is also cited here. Medusa's war against Terran is detailed in The Third Element and Shadow Warriors arcs. Context is summed up in the following prog: "Mars has come alive. A planetary entity called Medusa has created trinary monsters. It wants to annihilate the colonists and they want to annihilate her and her creations. It's a full scale war going on there". 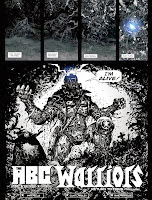