Tubal Caine tells the story of how he ends up "dying" on Mars in a Bar brawl, defending the honor of dead ABC robots, and how the ABC Warriors buried him in a human graveyard as Happy Shrapnel (6 pages).

The fact that Happy Shrapnel had died in a bar brawl was established briefly 30 years before in 2000 AD #397 (Nemesis The Gothic Empire). 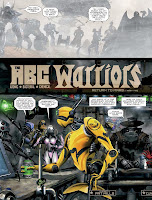