Damned Jone and Defoe departed in front of the Temple of Salomon, a monumental building created by Isaac Newton to replace Saint Paul. Meanwhile in Alsatia, the brethren celebrate this new reeks plague, while the Mayor is being judged and executed in his house by the London hanged. But the brethren are coming to confront them (6 pages)

Several people Hanged at Tyburn by the Theophilus, ordinary of Newgate, are cited thoughout the story (real people it seems). It is not the case in this strip. 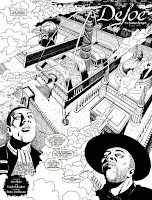