Defoe and Damned Jones arrive at Tyburn, execution day. They meet Theophilus, ordinary of Newgate. The latter is publishing pamphlets where he lists people he has hanged, with false testimonies of repentance. Words of the new hanged zombies plague have spread because the newly hanged are beheaded after death to prevent them from reanimation. Defoe suspects that whoever the hanged resurrectionist is, he is doing it for revenge and is involved in the war on the poor. Defoe doesn't want to deal with that affair, but the prime suspect is his adopted son, Sean (Faust's son). (6 pages)

Several people Hanged at Tyburn by the Theophilus, ordinary of Newgate, are cited thoughout the story (real people it seems). In this strip it is the case for Hugh Mills. I have no idea if citing a hanged man with the same name as himself is intended from Pat Mills.

Theophilus proposes a special execution day limited edition of his Tales of the Hung at Tyburn. 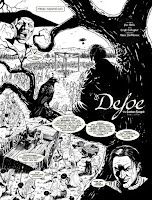