The Wizards meeting turns out to be them going after the Alsatia robbers. Seven Wizards will deal with this mission, Death Hunter (the Wizards leader), Finisher, Carrion Killer, Three Face, Noblesse Oblige, and Doctor Bendo. They will meet at the Cocoa Tree to discuss tactics. Defoe, disguised as Cold Cook, decides to get his family out of Alsatia. Later at the Cocoa Tree, the unmasked Wizards are attacked by Tom Cox's reeks group. They are after Judge Jeffreys, aka the Finisher (6 pages).

Several people Hanged at Tyburn by the Theophilus, ordinary of Newgate, are cited throughout the story (real people it seems). It is not the case in this strip. Among the Wizard already cited, another called Black Guard is cited. 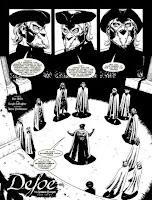 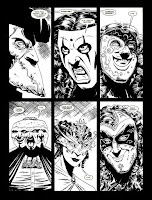