Judge Jeffreys is left alone with the reeks by his fellow Wizards, and soon he is being flayed and eaten by them. But soon after at Defoe's cottage in Tyburn, Damned Jones tells Defoe that the real Judge Jeffreys is still alive. It turns out he has a secret aetheric power enabling him to exchange is appearance for another's. Damned Jones believes that it is one of his fellow Wizards that has directed the reeks upon him in the Cocoa House (6 pages).

Several people Hanged at Tyburn by the Theophilus, ordinary of Newgate, are cited throughout the story (real people it seems). It is not the case in this strip. In a Pat Mills script, if a villain promises to eat someone's heart, it will probably end this way. Notice that the slaying is depicted along a ballad called The Death of Judge Jeffreys. Judge Jeffreys is a real person, which nickname was "The Hanging Judge". 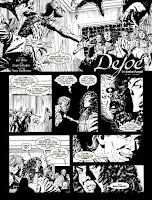 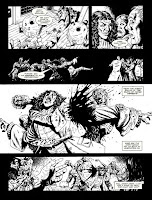