Size/binding: A4 magazine with thick cover

The Mek-nificent Seven have recently lost two of their number - Blackblood and Mek-Quake - to the evil Volkhan’s army of mekanoids. Now, Hammerstein recalls his time as part of Disaster Squad of Distinction, Ro-Busters… A robot has blew up the Maglev generator. He has been identified as a member of Nameless, the robot-liberation group led by Apex. A first disaster squad crew have been destroyed trying to reach the back-up generator, because of the tremendous magnetic dissonance. Howard Quatz is more than happy to send another of his robots, Ro-Jaws for instance (14 pages).

This story begins with a double length strip. Here the flash-backs are in full colors. The following advert for prog 1962 was printed at the end of this issue: 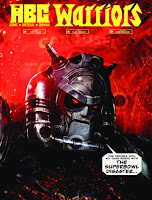