The resurrectionist hapens to be John Evelyn, a notorious arm manufacturer. Evelyn wanted to get rid of the drunken debauched Superior Heroes, and he had resurrected the London hanged to this effect. Evelyn wanted Defoe to lead his reeks in this task. But Defoe kills Evelyn. He is offered by Damned Jones to take the Brethren leads again, to exterminated Tom Cox and his fellow die hards in the sewers. But Defoe has another mission in mind, exterminating all the remaining Superior Heroes (12 pages).

Again, this is a double length strip so this story was initially structured for 13 parts. After working on the title for eight years, this strip was the last drawn by artist Leigh Gallagher. Hats off! 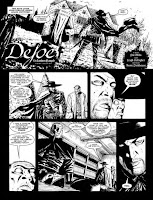 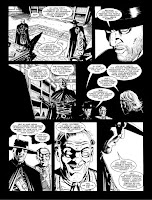