When he died, Henrich thought he could finally find peace, but instead he stumbled across the chaos of Resurrection, a reverse world where time runs backwards, and where he discovers he is a vampire. Under the guidance of Otto, a powerful vampire, he is trained and dubbed Vampire Knight under the name Requiem. From that moment on, a new death begins for him... Thrown into a cosmic conflict amongst strange gods, it is time for Requiem to engage in his first battle.


This reprint differs from the original edition (2004 Nickel cleaned reprint) by its new wraparound cover (see below), and the fact that it is 1 cm wider allowing a few millimeters of extra art on each side of the pages. There is also an extra section (8 pages) described below. 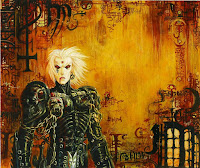