When he died, Henrich thought he could finally find peace, but instead he stumbled across the chaos of Resurrection, a reverse world where time runs backwards, and where he discovers he is a vampire. Under the guidance of Otto, a powerful vampire, he is trained and dubbed Vampire Knight under the name Requiem. From that moment on, a new death begins for him... Thrown into a cosmic conflict amongst strange gods, it is time for Requiem to engage in his first battle.


Original edition of this first volume doesn't displays the art as it was intended (all the 48 comic pages, cover, back cover, second and third of cover and flyleaf). Color brightness has been toned down too much so some details are merged in backgrounds, especially if they are dark.

For subsequent reprint, this issue has been corrected. The cover, as well as the back cover has been also 'cleaned' (plus a slightly different summary on the back cover). Below is the cover of the September 2004 reprint (note the changes in the background and Nickel logo). 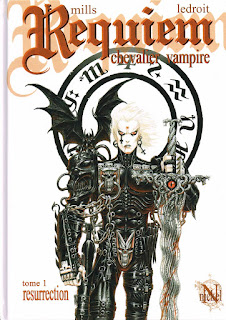 This first volume has also been sold in a slipcase edition with volume 2 and 3 (regular volumes inserted in a limited illustrated slipcase).


In 2016, Glénat the new publisher of the series has reprinted this first volume from the 2004 cleaned version.