Ro-Jaws, Hammerstein and Gottlieb have escaped Earth, and soon after all the Ro-Busters are landed on Saturn Six free from human persecution, except for Ro-Jaws and Hammerstein (or "Hell Something" as Ro-Jaws wanted to call him). Led Belly has passed his brain in a Juke Box while Sir Grey suspects he has given it to his dog Sparko. Howard Quartz is downgraded to a robot category A1 by Grey, and sent to prison after being molested. We flash forward to Mars, were Hammerstein explains to the ABC Warriors that the memory patch has degraded over the centuries, so it was only recently he realized Ro-Jaws had the defiance code. Now they have to get back to Marineris and download it from him (6 pages).

Sparko is a Westinghouse robot dog, created in 1940. 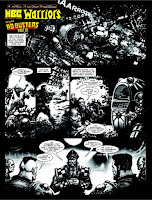 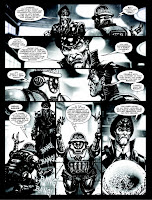