While Sláine still battles Gort, the Lord Weird, now to be refer as the Psychopomp, tells his acolytes that Sláine is probably not his father's son, and that is probably why he was beaten by him during his childhood. Gort seems to have second thought about finishing Sláine off, and the latter manages to draw on Gort Primordial's power to provoke a warp spasm (6 pages).

A Psychopomp is a mythological creature, literally a guide of souls. We will see that they are more than one Psychopomp in this story. This prog was teases with the following line "You Should See The Other Guy" (see below), and Simon Davis virgin art. 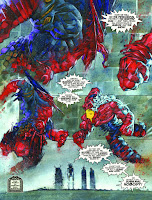 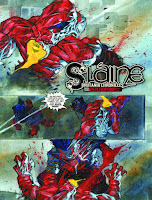