'The Vampires Ball': the battle between Lamias and Vampires reached its ending when Berserkers were thrown into the battlefield. Lamias are vanquished. Prisoners are transferred into the Satanik holds. An important ball is organised to celebrate Vampire's victory. Henrich, who is very disturbed since his reunion with Rebecca, finds himself having a hard time to accept the ritual offering of his former lover at Dracula's first bloodletting.


This reprint differs from the original edition (2003 Nickel) by its new wraparound cover (see below, sadly the spine cuts the illustration), and the fact that it is 1 cm wider allowing a few millimeters of extra art on each side of the pages. There is also an extra section (8 pages) described below. 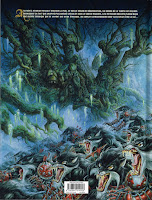 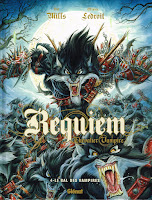