Lemuria is in turmoil! Lamias have stormed a black opium temple, and it's just a start... Concerned about taming the revolt, count Dracula is leading his armada towards Lemuria, ordering total obliteration of the rebel. Henrich, who is now aware of being Thurim reincarnation, finds himself in first line of battle with Otto on his side. They have to confront Lamias army, with their hordes of werewolves and centaurs...
Rebecca, ahead of the rebellion, has promised her compatriot Dracula's head. In this open war context, the two lovers will meet anew on the battlefield.


This reprint differs from the original edition (2002 Nickel) by its new wraparound cover (see below, sadly the back and front cover are shift vertically hence the black margins), and the fact that it is 1 cm wider allowing a few millimeters of extra art on each side of the pages. There is also an extra section (8 pages) described below. 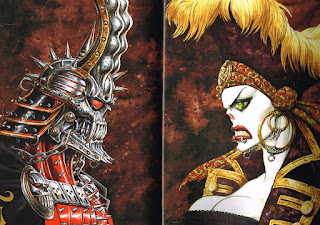