In Seabed the grand rodeo event has begun. McGurk has an appointment with Mr Karolos in order to put behind bars Pastor Sunday, but instead, McGurk is dismissed and Sunday will be the second -in-command of Earl Reagan. The later is being delayed at the Twenty-Third timeport by his encounter with his arch enemy, Claw Carver. And also, Karolos seems to have an agenda to choose himself the next president of the United States (6 pages).

We won't think too long at how it is possible to a time traveler to arrive late ... 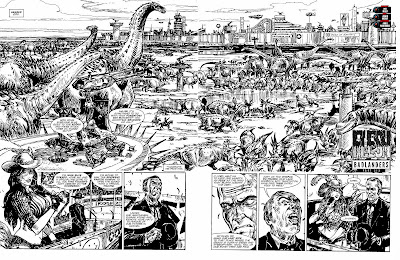