As Claw Carver and Earl Reagan arrived at Seabed city timeport, McGurk is forced to confront Gorehead with a knife as bullets are moving in real time. He lures the tyrannosaur out of town into the quicksand and manages to hit Gorehead in the head with his knife. But soon after he is chomped by the beast that sinks into the quicksand as Vegas reaches the premises (6 pages).

It's the end for McGurk, and perhaps Gorehead in this strip. 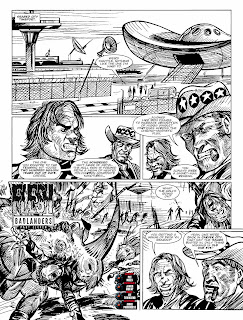