In New New York, Jay Kroc, the newly appointed CEO of Trans-time is being betrayed by the new US president General Butler. As millions are dying in "meltings" across time because of time change induced by human activities in the Cret, president Butler announces that time farming is banned, fleshdozers will stop, and transnational corporations have to be shut down. Civil war has now broken out in the twenty-third between the Presidency and the corporations. Most timeports in the twenty-third have been secured by forces loyal to TT. But base Six is currently under attack by the President's Marines. Kroc orders Earl Reagan to continue with his mission, i.e. driving the cattle to base Six before the herd is captured, with Claw Carver and Pastor Sunday. Claw Carver, who intends to avenge the death of Vegas mother probably knowing that Pastor Sunday is the culprit, is half proud (hating TT himself) half deceived (he doesn't care about eco-terrorism; just the Flesh business) by his daughter (12 pages).

A double length feature for this last strip of "Badlanders" that constitutes a game changer for the story. Smedley Butler is a real U.S. Marines Corp Major General that has denounced a plot between US Presidency and big Corporations (his testimony seems to be partially confirmed but I haven't done for my part any research on the subject). He has also criticized the workings of the United States in its foreign actions and wars.
There are references to book one, including Earl Reagan's young buddy Joe and Old One Eye.
Note that for this strip James McKay is credited for the pencils and Lee Townsend for the inks, as well as Dr Mark Witton as science consultant. 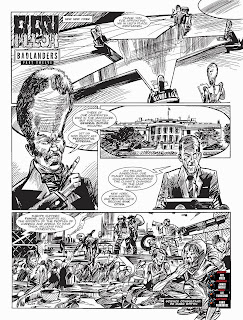