"Legion of the Damned": in Death Valley, Judge Dredd pays his respect to the Battle of Armageddon where Judges fought the robot armies of President Booth. But the whole battleground is coming to life with the presidential iron guard, the berserkers programmed to fight an eternal war. A depressed Judge Jack is killed during the battle, and the only two remaining Judge Dredd, Tweak and Spike retreat to an old spanish fort (7 pages).

Reference to President Booth is made in 2000 AD #68.
This issue also features a Tweak star scan: 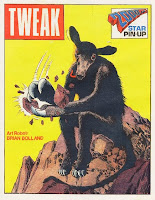