*Banned issues that had never been reprinted until this 2016 edition


This reprint is the first to feature the so called banned episodes, Burger Wars written by john Wagner, and Soul Food written by Chris Lowder (aka Jack Adrian). This is how this deluxe edition was advertised by Rebellion:

For the very first time, 2000 AD is to reprint the ‘banned’ episodes of Judge Dreddfrom the late 1970s, which parodied the great corporate powers of then – and now.
Published in 1978, The Cursed Earth was the first great Judge Dredd epic, but the story ran into trouble when two episodes – ‘Burger Wars’ and ‘Soul Food’ – featured parodies of Burger King, Ronald McDonald, the Jolly Green Giant, the Michelin Man, and a number of other prominent corporate characters in a raucous and shameless satire of American consumer culture.

After concerns of legal action at the time the then publisher IPC decided all subsequent collections of this classic strip would omit the satirical stories.

But, following recent changes in UK law governing parody, this July Judge Dredd: The Cursed Earth Uncensored will reprint the story in its entirety for the very first time in a glorious hardcover edition, available in the UK/Ireland AND North America!

The droids have been hard at work putting the collection together, including using their sleuthing skills to find some of the original artwork from the series by Mick McMahon and Brian Bolland. Old and sometimes damaged archive films have been replaced by fresh scans of original pages by reprographics droid Kat-Scan, who has also painstakingly restored the colour pages and centre spreads to the story.
So we are indebted to Earthlet Mark Perry, who possesses several pages - including two centre-spreads from ‘Burger Wars’ - and allowed us to bring them to the 2000 AD Nerve Centre to have them scanned at high resolution, meaning you’ll be able to see this classic story in all its glory in July.

This collected edition have also been published several months later in paperback form with another cover.


This hardcover reprint also contains the following extra (in bold I have highlighted the differences with the paperback edition):


Oddly, original prog covers from 2000 Ad #74 and 82 are missing from the cover gallery, they have been reintroduced in the December 2016 paperback edition (that do not features the map): 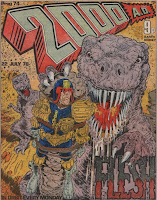 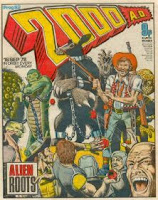 Notice that the following illustration was used earlier to advertised the book: 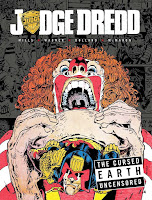 A limited edition (250 numbered copies), now sold out, was proposed directly through 2000 AD webshop. This is Rebellion description of this edition: 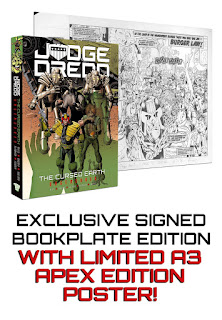 This special edition will include a numbered bookplate, affixed inside the book, signed by Chris Lowder (aka 'Soul Food’ writer Jack Adrian) plus other creators to be confirmed.

Also, supplied separately with each order will be one of 250 limited edition A3 posters of the 'Burger Wars’ double page spread by artist Mike McMahon. This high resolution scan of the original black-and-white artwork will be delivered rolled, rather than folded, and is exclusive to the 2000 AD webshop!

I have copy #173, and eventually the bookplate (a sticker glued on the second of cover) have been also signed by John Wagner. The A3 art print is not numbered nor signed (but is splendid anyway).

More pictures on this limited edition can be found here.
Email ThisBlogThis!Share to TwitterShare to FacebookShare to Pinterest