Hammerstein and Tubal Caine (aka Happy Shrapnel) are standing in front of the memorial of H-Day, immersed in the fog. It is the anniversary of H-day, the day Happy was the sole survivor, the only one to make it out an atomic hell. And then even after that tragic day, Happy was put to the test again by Howard quartz to prove humans that he is indeed destructible, but  he was saved at the last minutes by Colonel Lash in order to join Hammerstein squad (9 pages).

We discover Tubal Caine and Happy Shrapnel re-design by Clint Langley, and it's a feast for the eyes. Happy's hatred for Howard quartz is established here.

Tubal-cain is a biblical character, the first metal-smith,  "forger of all instruments of bronze and iron".

Here is the back cover of prog 2014, and a Sláine Star-scan by Mike Collins.

The following previews were advertised at the CBR site (on the left) and on 2000 AD online: 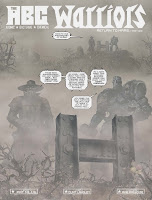 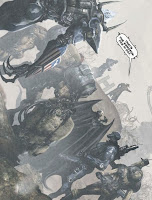