While Sláine slays the giant, Slough Thruc and Slough Foy discuss the "disease" of heroism and father's issues. Slough Foy is worried that the Archons awake if Sláine dies because the balance will be tilted in favor of the Cyths' side (7 pages).

We learn that Slough Foy has a doctoral thesis which subject is the war in heaven between the Archons and the Cyths  (and therefore he wears now the Salmon of Knowledge), and he is a lecturer at New Troy. Note that Seven giants are present on the prog cover.

The following preview was advertised at the CBR site and 2000ad Facebook page: 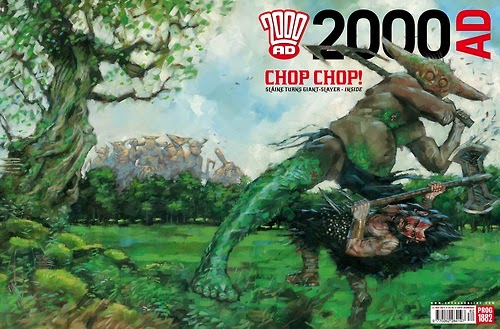