G-Man is an unpublished strip created by Pat Mills with artist Bryan Talbot. According to Bryan Talbot, G-Man was "one of the strips in a dummy magazine produced by Emap called Heroes, a rival to 2000AD".

On Bryan Talbot website, one's can find the cover produced for the occasion, dated 1986. 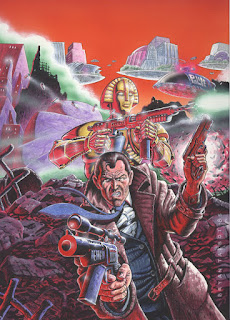 In November 1988, British Fanzine ARK #26 (ex Arken Sword) has printed the first unpublished 5 pages strip in B&W. Both Pat and Bryan have kindly authorize me to publish these pages here, many thanks for that!

Reading this first strip G-Man can be clearly seen as inspired by Pat Mills' Mekomania project as it features Detective Sam Grille and his robot companion Goldrod. Indeed, in David McDonald's Comic archive Beyond 2000 AD, two of the characters are described as follow: "Gold Rod was a story about a robot detective, who was something more than a robot" (quoting Ian Gibson), "Grille: a human hunter robot".