At Mr Soames Ad Astra Funeral Service things are getting out of hands as John confronts the body snatchers. But the Grim Reaper and presents himself to John as a being sent from another dimension to "make up the shortfull in our target figures". There seems to be also a termination warrant out on John because of his late sloppy workmanship. But at the last moment an act of self-sacrifice allows John a temporary suspension of the warrant (14 pages).


For this (very last?) installment American Reaper is present on the back cover of the magazine:

This preview has been displayed on the CBR page: 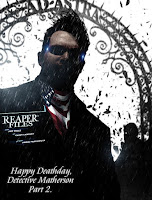 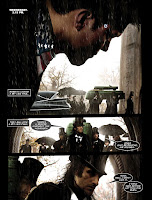