The reeks want Defoe's help to fight back against the rich in a war against the poor. Tom Cox threatens to go against Defoe's new family if he refuses to lead them. He send Tomazine and the children to Tomazine's sister in Alsatia. Meanwhile in Alsatia, the Brethren of the Night were killing the very last zombies from the previous plague (6 pages)

Several people Hanged at Tyburn by the ordinary of Newgate are cited thoughout the story (real people it seems). In this strip it is the case for Sawny Douglas, William Jones, Tom Rowland, Tomas Horistafe (hung for stealing linen) and Mrs Riggs (hung for stealing).

The process leading to this stunning cover is explained by the artist himself on his blog. 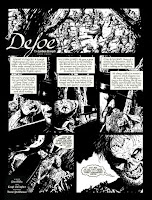