Ketch and Titus hid Carrion killer's corpse in Saint James Park where the Brethren are finishing off some hanged reeks. Soon Gallowgrass discovers the corpse while Ketch reveals to Defoe that he will take his old job back as hangman. Gallowgrass asked Defoe to be Ketch replacement as a chairman. In John Evelyn manor in Deptford, Damned has arranged a meeting between Defoe and six of the wizards suspected to be the resurrectionist: TheFinisher, Death Hunter, Doctor Bendo, Noblesse Oblige, Three Face and Black Guard (12 pages).

This is a double length strip. Several people Hanged at Tyburn by the Theophilus, ordinary of Newgate, are cited throughout the story (real people it seems). In this strip, it is the true identity of the Wizards Superior Heroes that is detailed. The Finisher is Judge Jeffreys, Death Hunter is John Evelyn, Doctor Bendo is Lord Rochester, Noblesse Oblige is the Countess of Shrewsbury, Three Face is the Earl of Pembroke, and Black Guard is Sir Charles Sedley. 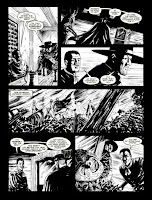 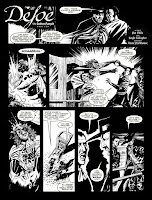