Gottlieb arrived at the Greasy Gracies, and soon after RIP squad begin their raid. The robots have to hide backstage, and Ro-Jaws and Hammerstein are forced to go performing on stage to escape the curiosity of the police. Quartz recognises in their dancing black slaves cakewalk, used to secretly mocking their owners. That led him to suspect Led Belly, the robot piano player, to be APEX leader. Meanwhile, Gottlieb is savagely beaten by the cops. That's too much to bear for Hammerstein so he steps up (6 pages).

Ro-Jaws bad attitude to authority is explained here by the fact that he has the defiance code without being aware of the fact. This strip is an alternative version of the events described in The Fall and Rise of Ro-Jaws and Hammerstein from 2000 AD #111. The name of the robot piano player, Led Belly, and Hammerstein last sentence of the strip, are literal references to the song "Take This Hammer" sing by Huddie William Ledbetter, better known as blues legend Leadbelly. This song, as well as the documentary of the same name, is also a strong anchor to the parallel made by Pat Mills between the robots condition, and Black people fight for civil rights. 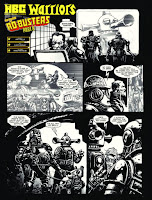 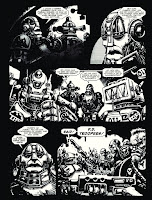