Bad Karma: the woman presents herself as Lakshmi, priestess of the temple of Khajuraho, and another one of Black Siddha incarnation. She is here to be the counsel for Rohan defence, i.e. their defence, before the Lords of Karma. Black Siddah is accused of mass murder, having used his Siddhis to defeat the Asuras, and to make amend, Rohan must now fight for Justice. The Lords of Karma look through their Akashic records, describing the event in their soul's hundreds of live. One scene shows Black Siddha using the Death Finger on three armed Auras. The death Finger is where a Kalari Payattu master attacks vital spots on an enemy just by pointing at them (6 pages).

We learn in this strip that Rohan's dad was a cop in India, and has been murdered when he took on the Bollywood mafia. That's when they leave India. I have found no real references to an American 'Siddha' magazine called 'Cosmic Knight'.

This issue features a two pages interview ("The Interrogation Cube") of Pat Mills as "suspect #3". 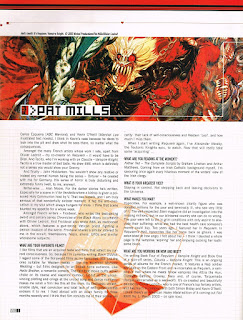