Tomazine confesses having let the stenches in, but Defoe eventually spares her because perhaps he would have done the same in order to save his family or perhaps he has feelings for her. Now Defoe thinks that the only way to defeat the reeks is to destroy the creature controlling them, Faust. but first, to get to Nonsuch House, Defoe, Tomazine and Damned will have to pass trough the reeks besieging the Tower of London by disguising themselves as undead (6 pages).

There is a short exchange between Defoe and Damned (while Gallograss prepared them to go outside) regarding one of Damned secret mission for the Crown, when he had pretended to be a bedlamite in order to reach and execute one of the fifty nine judges who signed the death warrant on the King. That probably refers to a real part oh England history that i'm not familiar with. 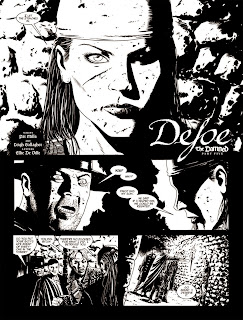