During breakfast Rohan shares his experience with Rak and Ritra, and his willing to pass on the Lords of Karma proposition/sentence because of what has happened to his dad in the past. Later, Rohan meets Lakshmi again at Mirabai's father's shop where she continues to persuade him to accept his sentence. Meanwhile, Rak and Rita seem to be on a secret agenda trying to find a worthy sacrifice to Kali by challenging some homeless people in an alley (6 pages).

We learn that Mardaka has the power/Siddhi of seeing, hearing and passing through walls. We also learn than in addition to be a Tantric magic master, Rak excels in martial arts.
Pat Mills makes a humoristic/serious statement in this strip about the contemporary idea of a hero:
Rohan: "But I can't be a hero. I'm not american."
Lakshmi: "How dare you? How dare you? You think the oldest civilisation in the world can't have heroes? You think only the youngest civilisatin has a monopoly on courage?"

This issue also displays the nine pages fifteen and final part of Thrill Power Overload featuring an article about issues between Pat Mills and Andy Diggle back in the days when the latter was editor of 2000 AD. 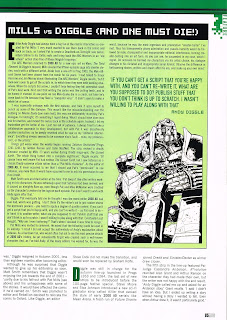