Title: The Damned part 9/The Book of Scars part 1

Faust delivers Jack to Defoe who beheads him right away. Defoe is now prepared to honour his part of the bargain. Damned tries to stop Defoe for but he receives from the later a foot blow in the neck. Then Defoe starts to show the weak spots of their defenses. Faust is able to controls his army from a crystal pendant and the final assault begins (6 pages).

Damned possesses an "electromagnetic" sword, when he talks about "five thousand Gilberds" he probably refers to William Gilbert's works. It is also revealed in this strip that Faust has already lived for two millennium and he has meat Saint Augustine in 383. 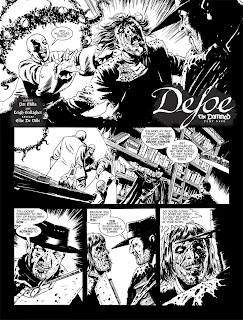 "The Book of Scars": Sláine is at Vevina's ("the most beautiful woman in all Albion" and ready to heads north to Ukko's tavern but Vevina seems interested to make him stay. In fact she has been possessed by the Guledig. He cannot bear that Sláine has became a legend on earth and so, the Guledig has decided to send his spirit back in times to be vanquished by his greatest enemies, starting by the moment he was sentenced to the wickerman (7 pages).

The Book of scars has been especially written to celebrate the 30th anniversary of the series. So there will be a gathering of Sláine greatest foes as well as the return of cult artists on the strip. This first strip by Clint Langley displays his "Photoshop" style.

This prog has been published with to variant cover, here is cover 2 of 2 (wraparound): 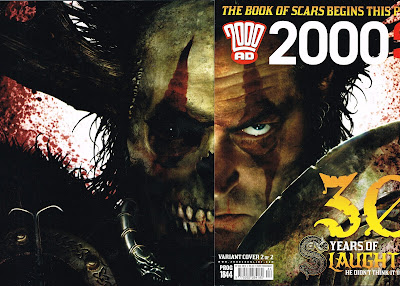 There were numerous teaser to celebrate this anniversary, including this one: 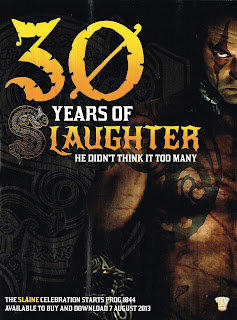