Title: The Damned part 10/The Book of Scars part 2

Defoe seems to have a new purpose, that is seeing the British Empire brought to its knees. Meanwhile at the Tower of London, the battle seems lost for Defoe's Brethren as Creely succumbs under the reeks' assault leaving only Bodie, Mrs Hopkins and Ketchie. With that fight, Faust is after Britain's gold reserve in order to ruin the Monarchy and the Nobles and to prevent any idea of Britain's conquest of the world. But Defoe has another global agenda, fighting against all scum who would tyrannise the common people, including Faust and his New Moral Army. so he manages to destroy Faust's crystal claiming that the latter don't own his soul for he has already sold it to a greater cause. But Faust escapes Defoe, bringing Tomazine and Sean with him (6 pages).

Turns of events are very surprising and refreshing in these last two strips, as the free spirits (Pat mills and his character) make their way through the story. 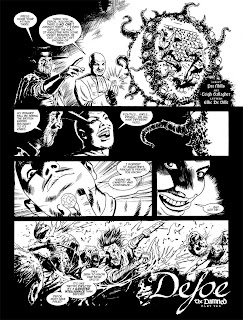 "The Bride of Crom": Sláine and Ukko are prisoners inside the Wickerman to be sacrificed to Crom Cruach.  In the head of the gigantic wickerwork is Mebd, priestess of the Badb, ready to be married in fire to Crom Cruach. Sláine mission is to save her but this time thanks to the Guledig, Mebd was waiting for him and there is binding spell put on Sláine to prevent him to have his wrap spasm. However, Sláine manages to convince her to escape her fate, and history can retrieve its original course while the warped warrior defeat Slough Feg's half-dead (7 pages).

This strip is an alternative version of the events described in 2000 AD #337 through 342. Clint Langley adopts a style and frames that are clearly an homage to Massimo Bellardinelli's art. No doubt that he late artist would have been called up to do this strip for this 30th anniversary. 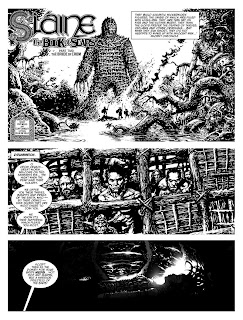