Title: The Damned part 11/The Book of Scars part 3

The crystal broken, Faust has lost his inability to control the reeks and they have come back to being shambling zombies, allowing the Brethren to finish them. Meanwhile, Defoe is boarding Faust ship and they engage in their final confrontation, both with Gilberd's enhanced swords. Eventually, with the help of Tomazine, Faust is impaled on Defoe's sword, and thrown away in the water where he is electrocuted by fifty-thousand gilberds (6 pages).

In a way, Defoe ends two thousand years of capitalism (i.e. "the natural order of things"). This add was running in JDM #339 issued in August 2013: 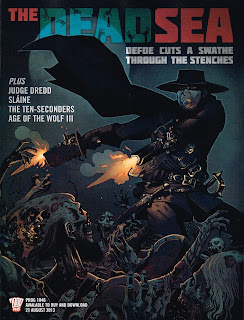 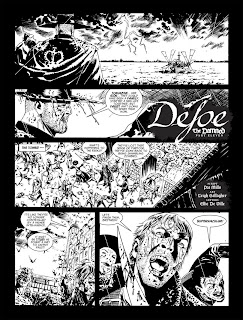 "Sky Chariots": in this alternative version of the story where Sláine acts as a battle-smiter to Slough Throt, the Guledig asks the later to turn him into a follower of the Triskele and alternatively destroy him. This time, the battle with the other skyblades turns short as Sláine axes is now blunt, thanks to Slough Throt doing. But history quite regains its course again as Mor-Alltach volcano exploded destroying all the sky chariots and leaving Throt at Sláine's mercy (6 pages).

This strip is an alternative version of the events described in 2000 AD #352 through 360 already drawn by Mike McMahon. The last panel of the strip is a jewel in itself, showing again that Sláine is not the regular hero type (I'm thinking of the fate of a certain Fomorian who was thirsty as he agonized at the feet of our Celtic hero). 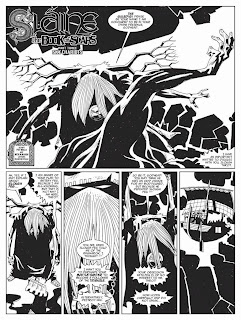