Original material originates from 2000 AD, bus this book reprints US Eagle Comics miniseries with modified material (re drawn and coloured). References to the original issues of 2000 AD could be find in the Eagle Comics series' files (when they will be created!):

*This is the only strip that was not included in the Rebellion "Complete Nemesis" reprint line.

Below is the cover of the inner book. Termight edition has a limited print run of 200 copies and comes with two exclusives book plates signed by Pat Mills and Kevin O'Neill. The regular edition of this reprint is known as Nemesis the Warlock Deviant Edition. 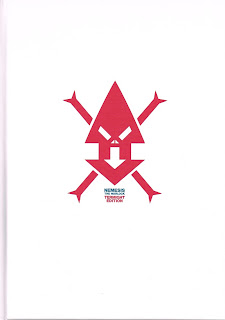 Note that this reprint is a little bigger than the Eagle Comics hence perhaps a reproduction that is slightly degraded from the original material (this remark is in no way a mean to denigrate the very good work of Rebellion's people ).

See also here for additional pictures of this book.