Title: The Damned part 12/The Book of Scars part 4

The army has arrived and they are using machines designed by Cromwell to clear the reeks. The Tower of London is saved and flying wizards has came for the final blow and probably to claim credit for Brethren's victory. Eventually, Defoe leaves Tomazine, the Brethren and the Crown behind, despite Damned's advice: he is going to free the people (6 pages).

In this final strip we have "Rosicrucian" war machines from Robert Fludd. A very nice ending to this arc, the series is ready to take another turn.

None so far up to now, scheduled for November 2013.

"Elswhere": in this alternative version of "Time Killer", Sláine enters the El world without Murdach and the Pluke. There he has to face alone El women and Elfric, and this time the Guledig has taken care of their iron related weakness. Eventually Sláine defeats them all with its skull belt which is a devastating Tathlum (6 pages).

This strip is an alternative version of the events described in 2000 AD #411 through 428 already drawn by Glenn Fabry (and David pugh). A star scan by Dave Kindall was included in this prog: 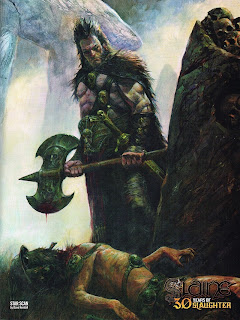