Title: The Book of Scars part 5

"The Horned God": in this alternative version of "The Horned God Book 3", Slough Feg comes back from Crom Cruach's belly thanks to the Guledig, and battles Sláine again to stay the Horned God. Ultimatly, Sláine is turned into a Shoggey beast by the Earth Goddess and he defeats again the Lord weird (8 pages).

This strip is an alternative version of the events described in 2000 AD #688 through 698 already drawn and coloured by Simon Bisley, and narrated by Ukko the dwarf. This strip also refers to "The Shoggey Beast" story from 2000 AD #348 to 351. It is interesting and a complete laugh to discovers that the story is seen as altered by the writer of Sláine's saga who is asked to do a "new edition". Brilliant strip indeed! A star scan by Nick Percival was included in this prog: 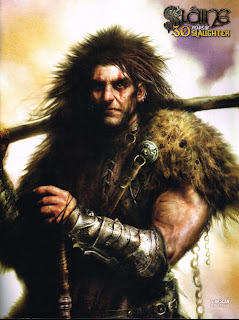 The week before, Simon Bisley's return to Sláine was fully teased on 2000 AD's related site (I have found the two images below on their Facebook page, and yes it is wrongly numbered on the left): 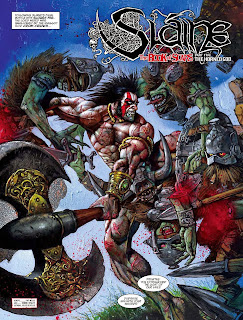