Six months later. More and more British people are protesting against Howard Quartz's Robots taking over their jobs (as Ro-busters), which has led to an unemployment crisis. Amongst the demonstrators at Grosvenor square are members of the Grinder movement, biopunks who have undergone extreme body modification and who see robots as rivals, a threat to their dreams of becoming transhumans. Under the Emergency Powers Act, the Hammersteins and Raptor Drones (that watches everyone's move everywhere), are permitted to use minimum force to disperse the crowd. In addition, it is now a criminal offence to attack a robot. Adam Rimington, leader of the True Democracy Party is leading the protestation against Quartz along Grinder leader, The Junk Monk. Tension is rising up as Bill Savage enters the premises (6 pages).


The Ro-busters make their entrance in Savage timeline as Quarts's robots, used to rebuild England. Notice the hint regarding Ro-jaws when characters talks about robots garbage collectors: "You mean those things with teeth that swera at you when you put rubbish in their mouths? Yeah. One of them told me to 'Bog Off'.
Also The Junk Monk, Grinder's leader, is wearing a Blackblood mask. 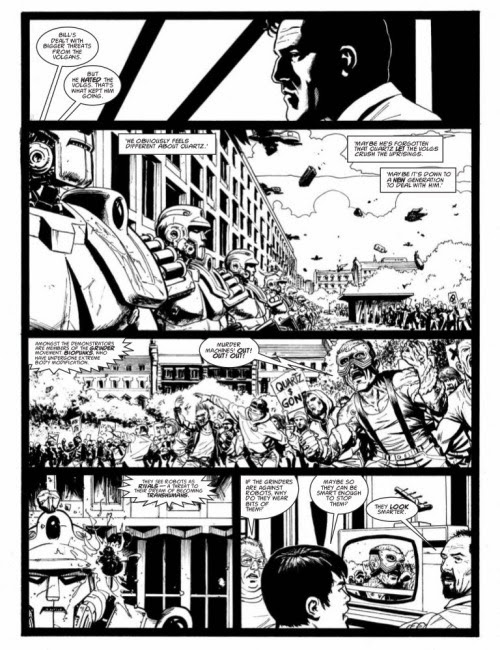