Gort's arguments about the way of the drune Lords have triggered Sinead awakening, and she can now join force with Sláine. And soon they manage to escapes the Trojan. Gort wants to go after them but Gododin has other plans for him and fears that Gort has grown a too powerful death wish as a result of Drune's 'enlightenment' (6 pages).

Pat's ideas of how the actual world is run and how some people react to this truth are plainly stated in this strip, without detour or hidden subtexts. I really agree with him on this on both levels, what is stated and the way it is stated (as when you have something to say, just say it).

The following preview was advertised at 2000 AD Tumbr page: 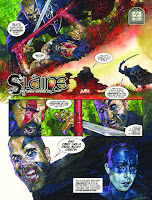 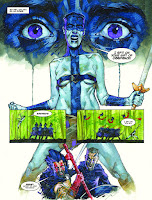