Ten years earlier we see Gort during training at New Troy University. He had been given the Salmon of Knowledge to see the truth, that is the Drunes were lying to the students. After summoning the Guledig he was convinced to obey as a dead body obeys, hence his present death wish. Meanwhile, using his secret grief that he is responsible for his mother's death, Gododin manages to unblock Sláine's mind in order to locate him in the forest. But Gododin's maneuver has also triggered Sláine's warp spasm (6 pages).


The following preview was advertised at 2000 AD Tumbr page: 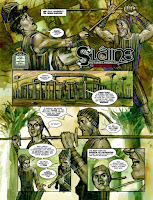 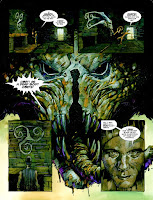 This issue also features this advert for next prog: 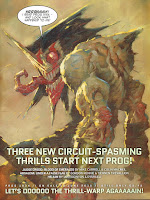