The Drunes are in fact experimenting on producing a highly powerful warrior of their own, called the Primordial, that will bring order to Albion. So the Emperor Brutus will reign supreme with the Drune Lords to guide him. Although there is concern that Sláine's warping could awaken the Archon, Yaldabaoth. Meanwhile the Trojans are defeated and now Sinead and Sláine will have to find the Primordial. On the way, Sinead will have to talk about Zana, a girl that was in the next cell to her when she was prisoner. In Monadh, Gododin begins his Sloughing while Gort prepares himself for his final test (6 pages). 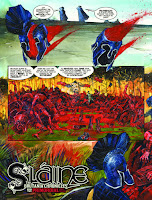 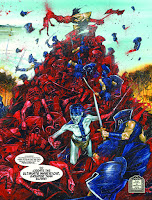