Gododin, or The Psychopomp, had sent Slough Thruc to carry out a ritual over the treasures of the Godess that has consequently stopped the Earth power reaching Gort and Sláine, and they are returning to normal. Soon Gort is knocked out by Gododin, and now Gododin turns his attention to Sláine. He wants to kill the Celtic warrior in order to be able to command him after death (6 pages).

The Psychopomp seems to have revealed the true meaning of his catchphrase as he wants Sláine "to obey as only a dead body can obey".

This preview has been published on the CBR site: 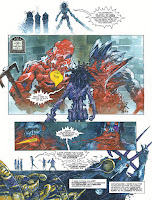