At the last second Gort interposes himself and saves Sláine. While fighting, Gododin suggests that Sláine is not Roth's son. Suddenly the Archon, the Cyths' jailer, is beginning to wake up, and Gort and Sláine take this opportunity to escape. But Gododin has summoned the Half Dead army, led by the Trojans (6 pages). 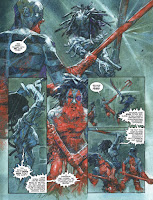 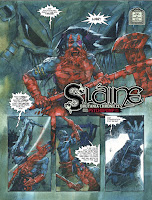