Rak and Rita reaveal themselves as true worshipers of the dark path of Tantra, as they give to Kali's Rakshasas homeless people to feed on. The next day Rohan continues to cross path with strange incarnations (a talking dog former known as the late Eddie which was with Rohan at uni), that try to convince him to follow the sentence of the Lords of Karma, unless it could be reincarnated next as a dog, or worse, a gladioli. He even encounters Black Siddha himself which begins to reveal to him that Lakshmi too has to redeem herself after using black magic spells (6 pages).

We learn that Lakshmi was a Devadasi, a temple dancer, and she had put a spell of unsightliness on her best friend Rani over a love quarrel. 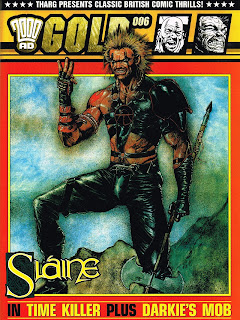